On May 10, 2016, Eddie went to sleep to await Jesus' return.Eddie died at home with his family of natural causes. 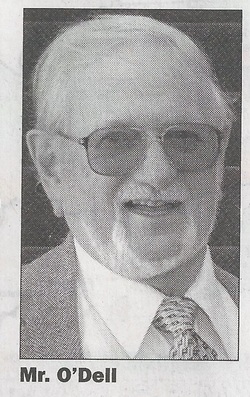 Eddie was born to Floyd and Martha (Andrew) O'Dell on August 1, 1932, in Forks.
Eddie attended school in Gardiner at the current Gardiner Community Center.

He met his wife, Zola, while working at a sawmill in Randel, Washington, across from Zola's home.
Zola got his attention by whistling at him, and soon he was showing up on his Indian motorbike to get her.
Eddie and Zola married September 11, 1954, in Packwood, Washington.

Eddie and Zola moved back to Gardiner, where his family had homesteaded and he had grown up.
There, they settled to raise their family and start a logging business.
Eddie logged in many areas of the Olympic Peninsula with the help of his sons up until his retirement.

In 2011, Eddie was honorary logger at the Sequim Irrigation Festival's logging show.
Eddie and Zola attended a Seventh-day Adventist tent meeting in 1963 and then joined the Sequim SDA church, which they were active in for many years.

When you could get Eddie out of the woods, he loved being out on his boat with family and friends.
One of his favorite place to go was Princess Louisa Inlet.

Thank you to the PENINSULA DAILY NEWS for this article.