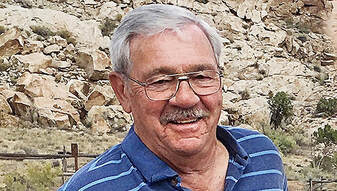 Richard (Dick) Donald Hanel, born in 1942 in Mankato, Minnesota, passed away at home in Prescott Valley, Arizona, with his family at his side on Dec. 9, 2020. He was 77 years of age. Dick fought a courageous battle against acute Myelogenous Leukemia (AML) for the past seven months, but he is now at peace.

Richard married Linda Huffstutter on Oct. 10, 1964, in their hometown of Mankato. He was employed by Madsen’s Grocery Store; Midwest Coaches & Buses; and Honeymead Soybean Refinery as a truck driver. The Hanels moved to California in 1988 and Richard finished his working career at Shell Oil in Martinez, retiring in 2005.
He was an avid woodworker and loved to be in his shop. Later, he learned stained glass, completing his final creation — an orca whale — in November 2020. He learned to play Pickleball while traveling in their fifth wheel and enjoyed many mornings playing with friends on the court.

Preceded in death by his parents, Herbert and Leona Hanel; his sister, Karen Hughes (Nov. 21, 2020); and his brother, Jerry Hanel (Nov. 30, 2020). He is survived by Linda, his wife of 56 years; daughter, April Hall (Steven); his son, Curtis Hanel (Sharon); and grandchildren, Sydney Gilliam (Timothy) and Jack Hanel.

A Celebration of Life will be held on Jan. 24, 2021, at 2 p.m. at Hope Lutheran Church, Chino Valley, Arizona. The celebration will also be streamed live at www.hopechinovalley.com. The family has asked that in lieu of flowers, please consider donating to the Leukemia & Lymphoma Society (https://donate.lls.org).

Arrangements entrusted to Ruffner-Wakelin Funeral Homes and Crematory. Please visit www.ruffnerwakelin.com to sign the online guestbook and share a memory with the family.