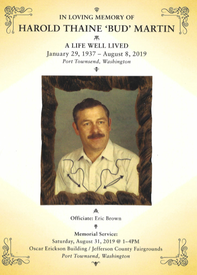 Harold Martin
Harold Thaine "Bud" Martin passed away quietly at his home in Port Townsend on August 8, 2019 with family members present. He was 82 years old and had Parkinson's disease for the past 12 years.
Bud was born on Lawrence St." in Port Townsend on January 29, 1937 to Lelah Louvina (Feldmoior) and Cecil Vaughn Martin. He was a graduate of Port Townsend High School in 1956 and played basketball and football while in high school.
He met his future wife at the Rhododendron Festival carnival in May Of 1957. On February 2, 1958 he married L. Eileen Knapp at the Gardiner Community Church. They celebrated their 50th wedding anniversary there in 2008, hosted by their sons. They were honored by the Port Townsend Rhododendron Festival as Grand Marshalls for the parade that year with the theme 'of "Happily Ever After".
Upon graduation, he worked for the IGI grocery store on upper Sims Way, then in Mount Vernon for Libby, McNeil and Libby, and back to Port Townsend at the Crown Zellerbach mill.
In 1962 he started working for the U.S. Forest Service in Quilcene planting trees, putting in trails, and worked his way quickly to being a crew foreman, and later to Forestry Tech. During his 22 years he went on many wildfires in the Pacific Northwest. For eleven summer a helicopter was on the district, he was the Helitack foreman and was flown many miles patrolling the Olympic Mountains for fires. His career was cut short in 1982 by a chemical deficiency caused by the smoke he inhaled on all those fires.
Bud enjoyed many hobbies  during his retirement, gardening, carving, collecting miniature cars, stamps and HO trains. The one he enjoyed the most was tracing his family' tree, and was a member of the Jefferson County Genealogical Society,
He leaves his widow, Eileen at the family home, sons Rick and Jeff (and Toresa) in port Townsend, and son Brian in Port Angeles. Five grandchildren, Jaikob, ABhley, Breanna, Brittany, and Tylor, Stepgrandsons Derek and nanny Thompson. Great grandchildren, Trinity, Evelyn, Hope, Joy, Aliyah, and Alexzina. Step great grandchildren, Olivia, Tessa and Jackson Thompson.

He is survived also by his siblings, Lou Mullins and Robert Martin of Port Townsend; many nieces and nephews. Preceded by his parents Lelah and Cecil Martin, brothers Meril. Don, Ed, Sisters Leona and Betty.